U.S.S. OCELOT (IX-110)
c/o Fleet Post Office
San Francisco, California
Tuesday, 6 November 1945, 8:30 PM
Dearest Eleanor,
Another day gone but still no good news. There are no jobs for any of us to do, yet no one is being released until he has enough points. From the looks of things the Commodore of Service Division 104, the big boss here, is only interested in one thing and that is keeping his command as large as possible. Of course if all who had nothing to do were sent home, the commodore wouldn't have much of a command and the service division might get broken up. Then he'd be a captain instead of a commodore and we can't have that.
I do hope you've done some letter writing. When the Navy is supposed to be cutting down, a good question is: why men should be kept out here with nothing to do? As long as I am in the Navy I'm not supposed to criticize the "holier than thous" who blundered through the whole war and left it up to the reserves to fight and win. They are out here because it's their career. They can't see why anyone should want to go home.
Today, as usual, was spent loafing and reading. Tonight's movie was "The Gay Senorita" with Jinx Falkenberg, a story about Olvera Street in Los Angeles. The story itself was poor but the music and dancing made it excellent entertainment. I enjoyed every minute of it.
I'm enclosing some more snaps. No negatives will be available so please take good care of them.
Wish I could say something to cheer you up, but I just can't. I've let you down so many times now that until I actually have my orders in my hand I won't say a thing.
No more for now Darling, so I'll sign off. I love you.
Sadly,
Gil
Unknown if these are the snaps that were enclosed 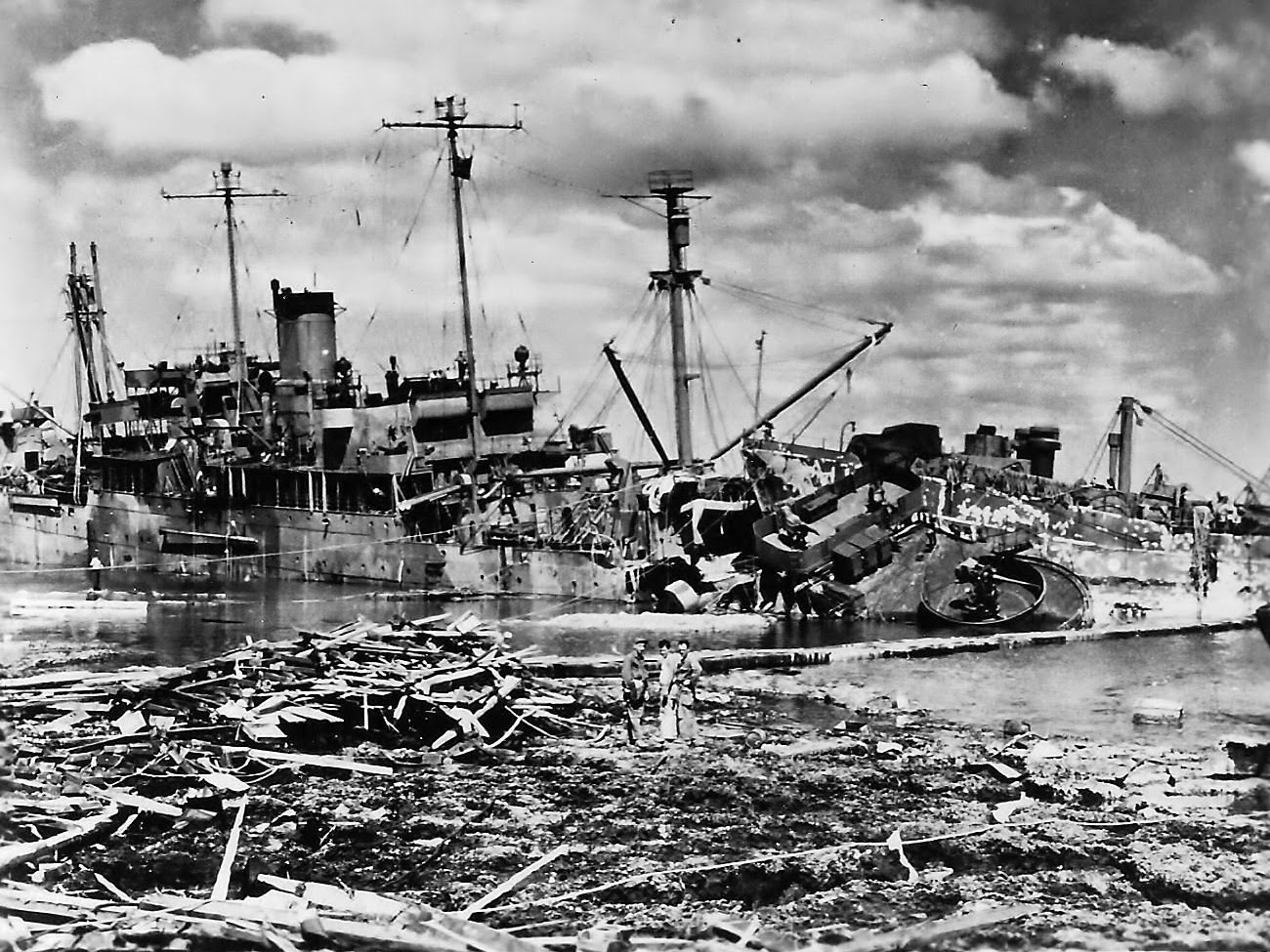 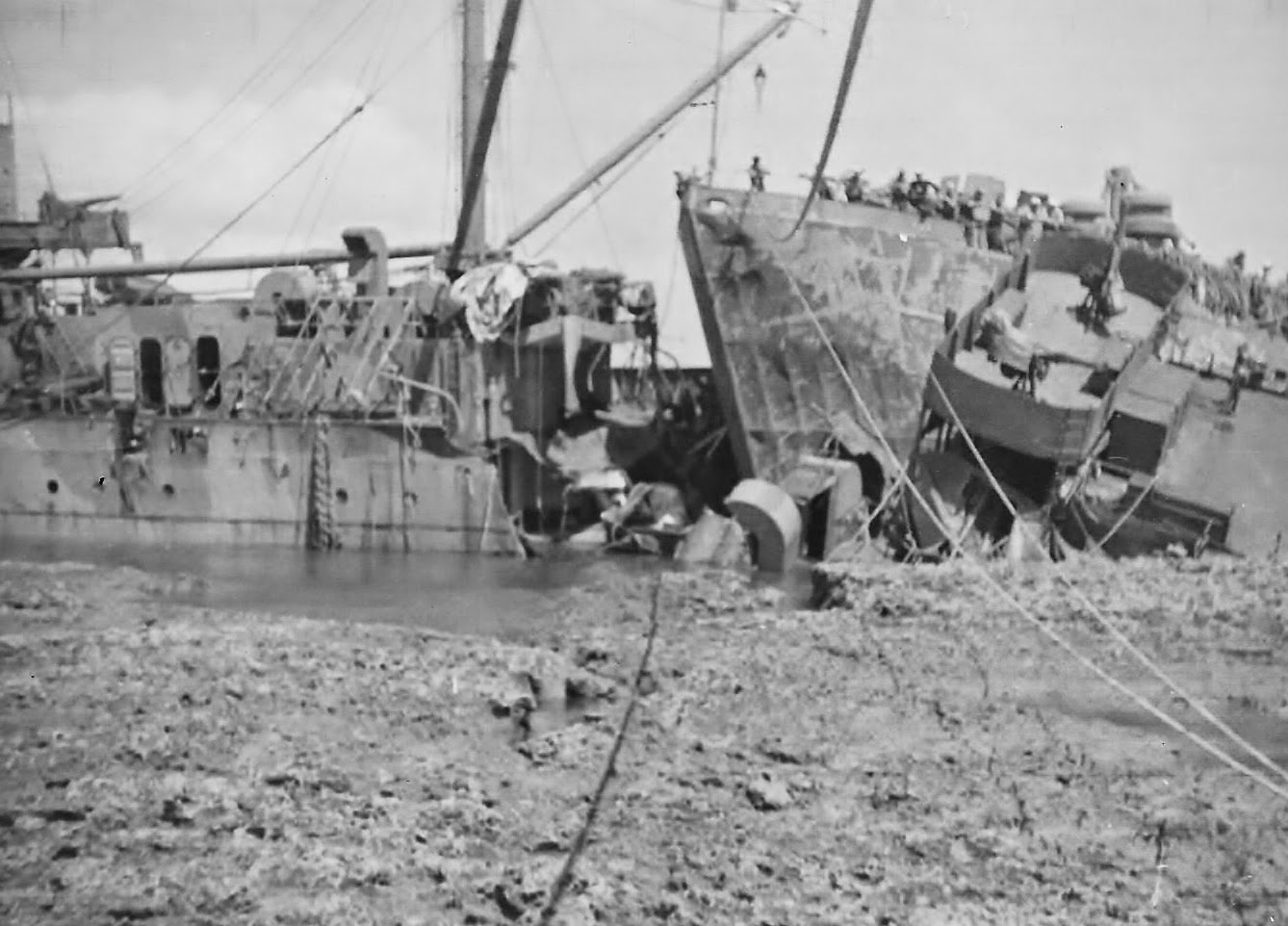 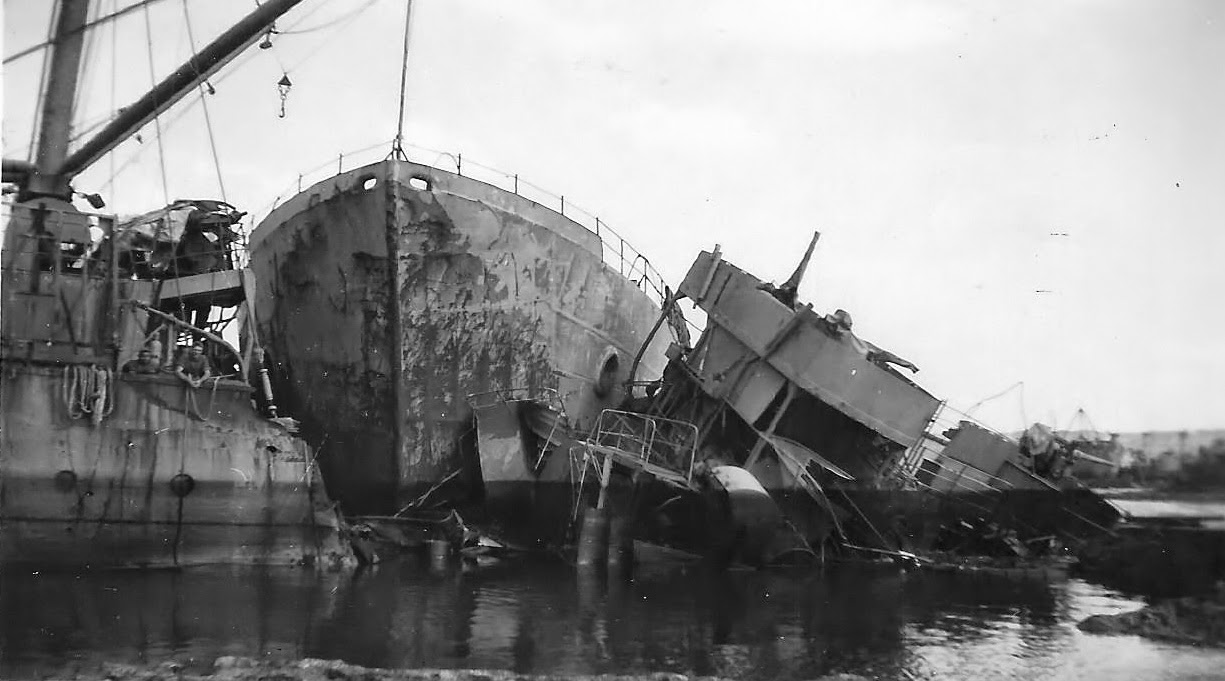 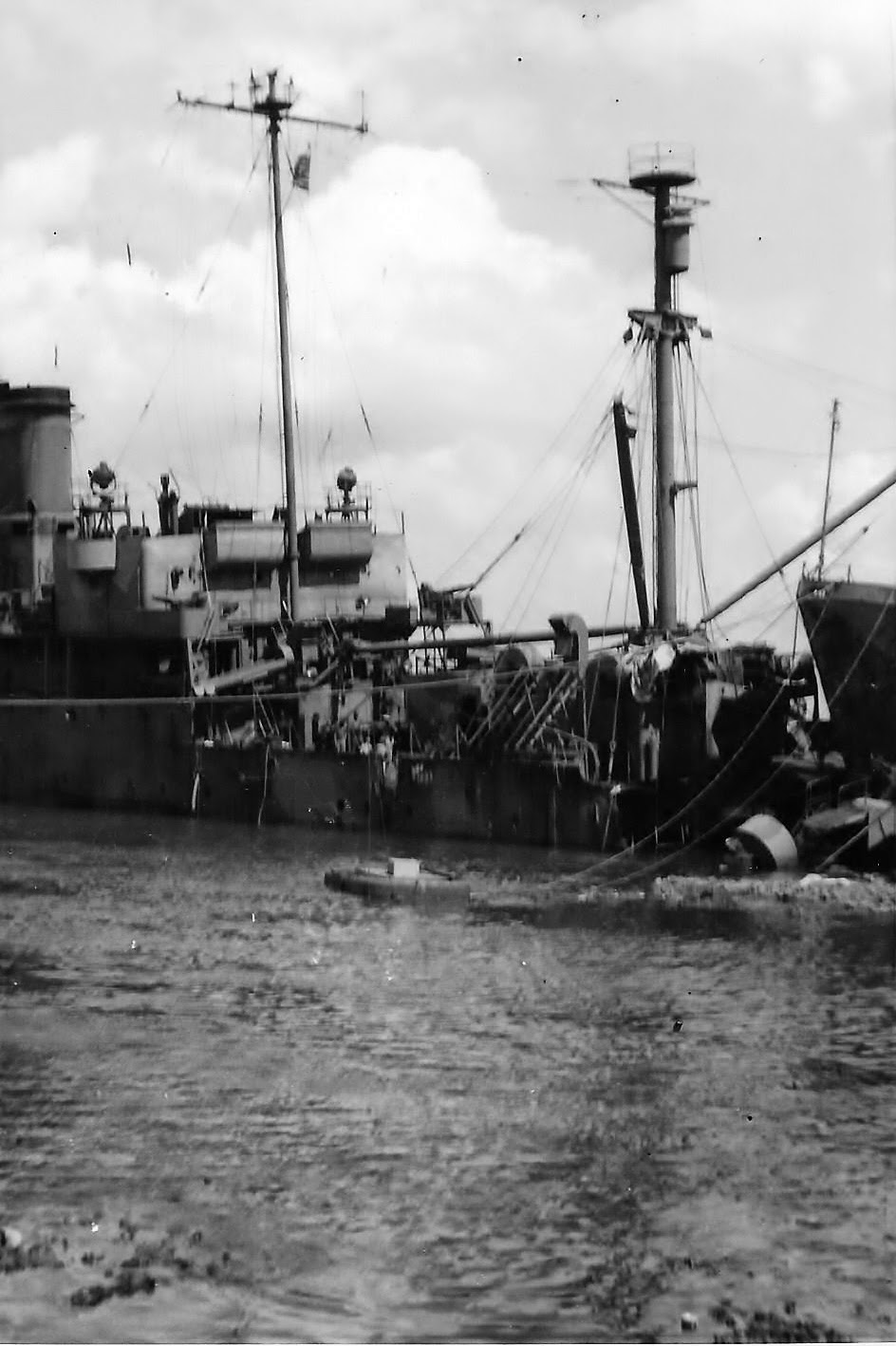 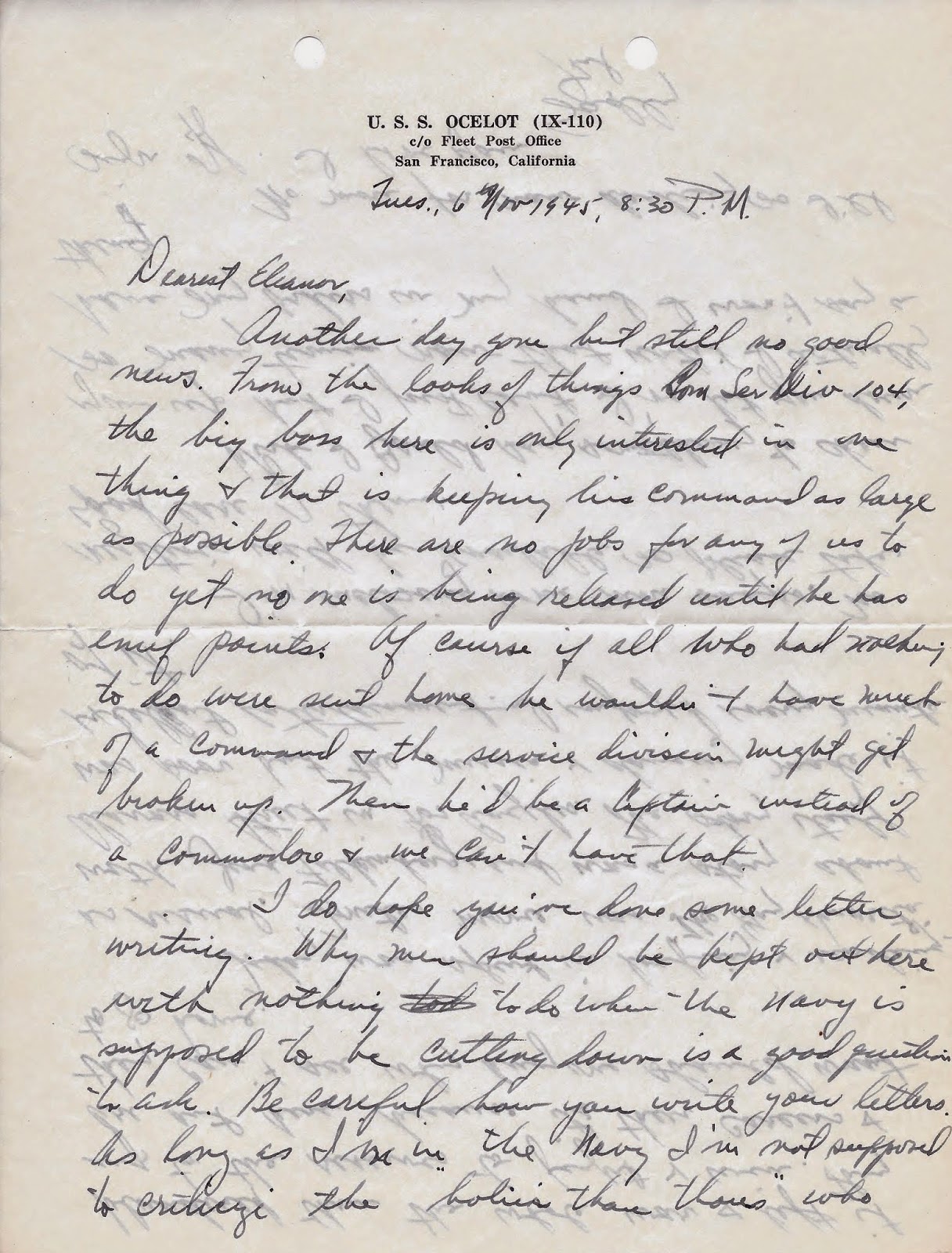 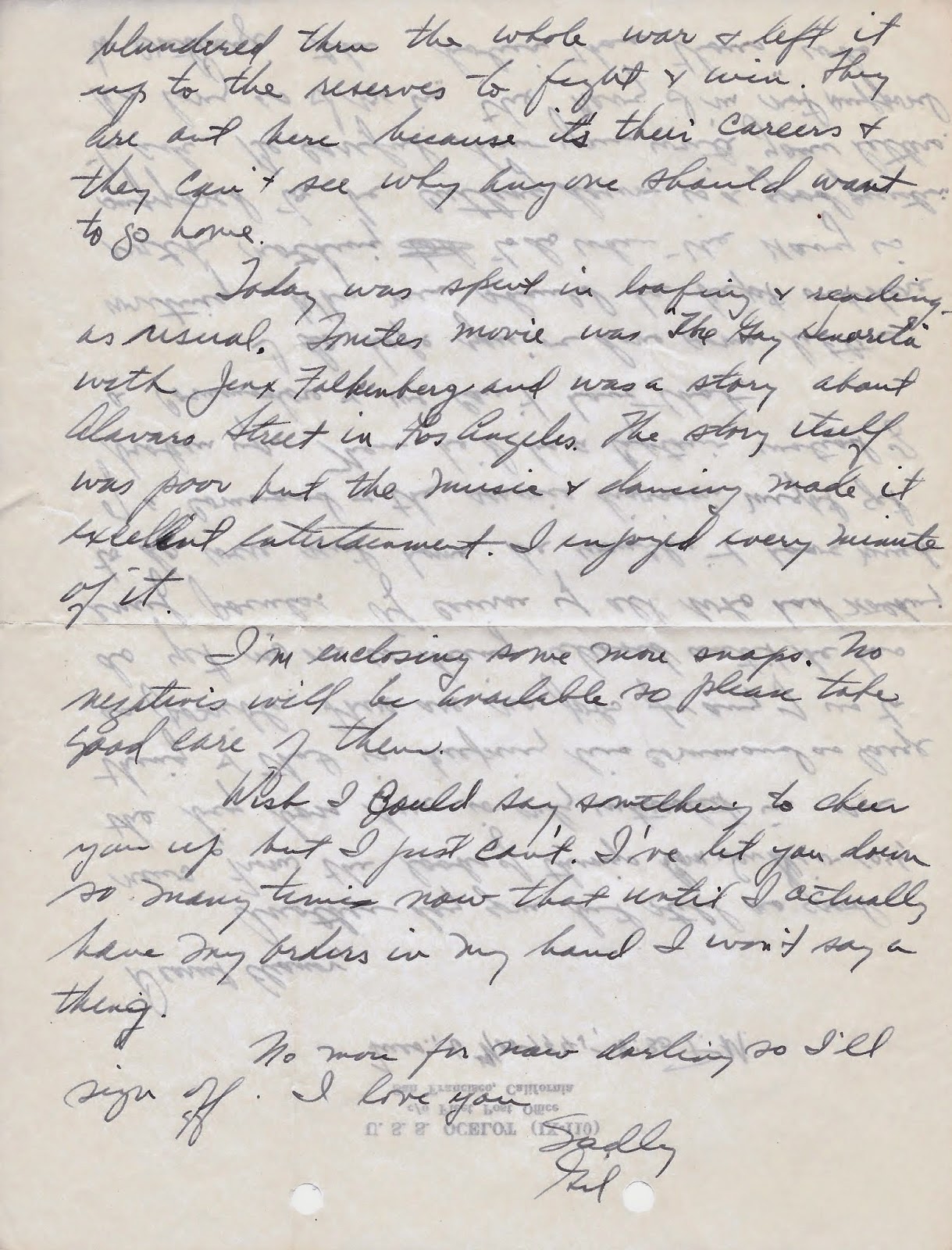 Posted by Linda Steingart Frumkes at 9:31 PM No comments:

Email ThisBlogThis!Share to TwitterShare to FacebookShare to Pinterest
Labels: 1945-11-06 A

Dearest Eleanor,
A new week just beginning. This business of waiting is beginning to tell on most of us. We sit around all day with nothing to do but get on each other's nerves. Nothing really serious has happened. But from time to time, there is bickering. Personally, if I've got to be out here, I'd just as soon do some dentistry, but no one has asked me what I'd like to do.
This morning I read the Omnibook condensation of "Black Boy" by Richard Wright. It is well written and interesting, but the autobiography ends so abruptly that one feels that the book is incomplete. Now I'm half through "Dan Sickles" by Elgcumbe Pichon, another interesting book condensation. I believe you'd enjoy reading it in its original form.
I've gotten hold of some more snaps. Some are dups of those I've already sent on and some are other scenes shot here and also at Leyte. I'll send them along with some more "gook" money. I don't know the derivation of the word "gook" but that's what the natives and anything pertaining to them are called.
Tonight's movie was "Thrill of a Romance" with Esther Williams and Van Johnson." There was so much music and also so much of the Williams gal that it was worth seeing again.
I got two more letters from you and one from your mother. As you can see I'm not on my way home yet and don't know when that happy day that I embark for home will be.
About dental equipment. Don't worry. I'll probably get into something temporary at first and take my time getting properly set up.
That is about all for now. Goodnight my darling. I hope you can hold out as long as I can. This can't continue much longer.
Love,
Gil
P.S. Here are a couple of one peso Philippine notes too. They are worth 50 cents each. 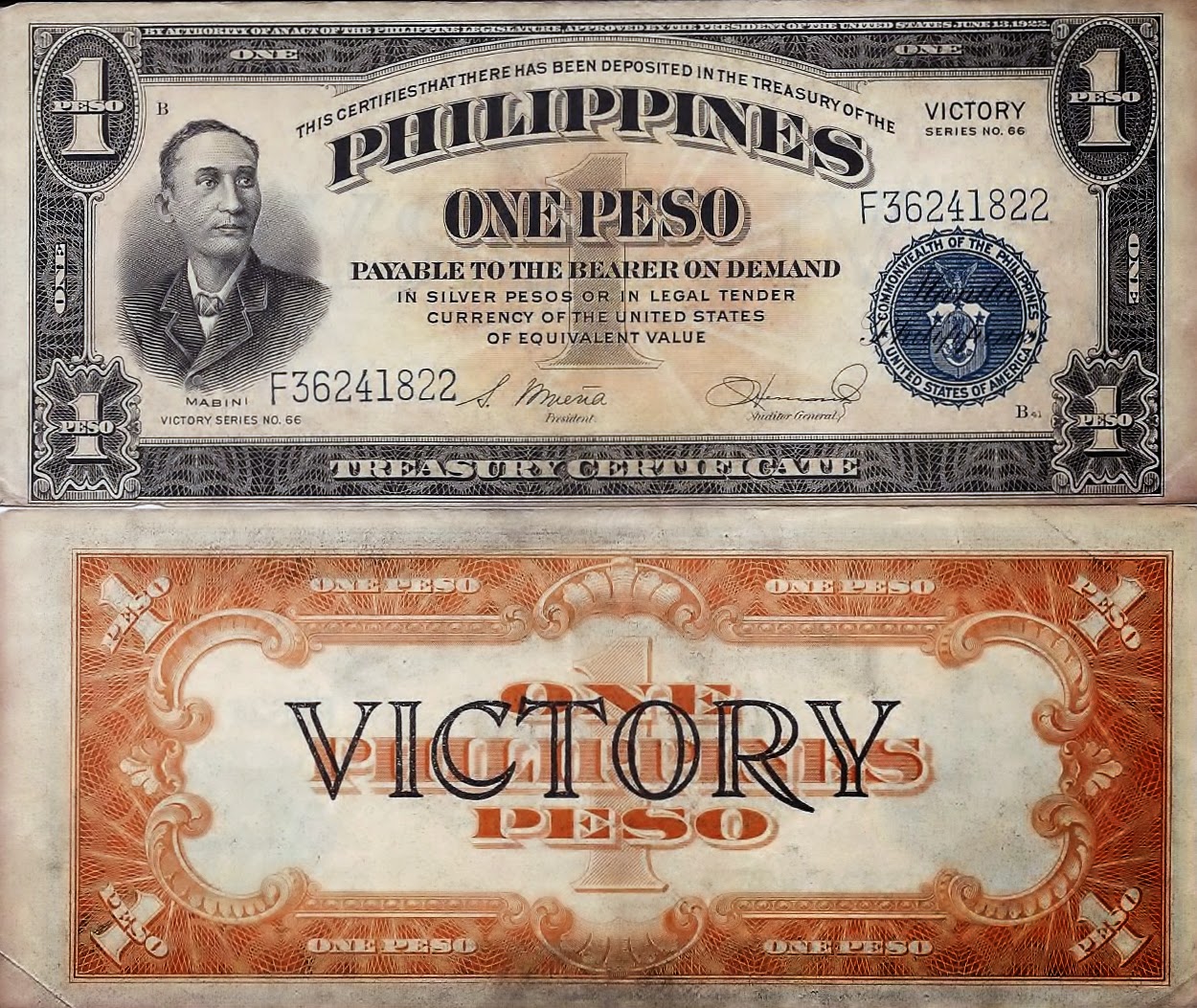 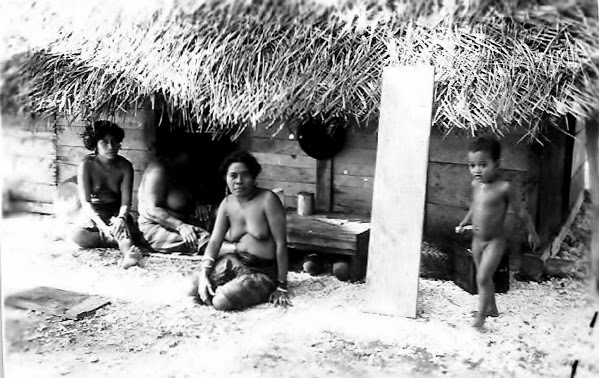 The Ocelot and the bow of the Nestor 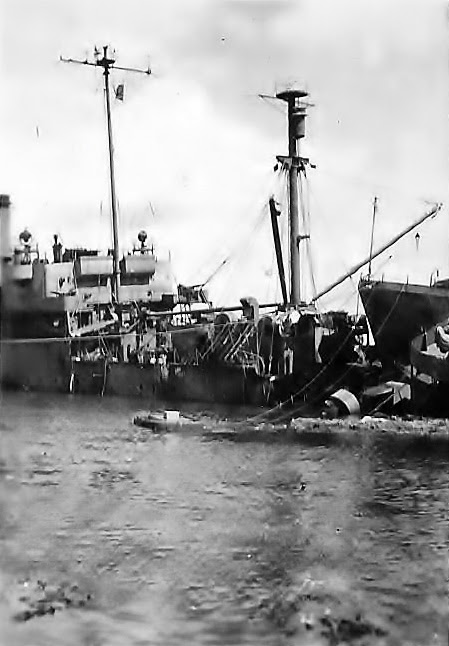 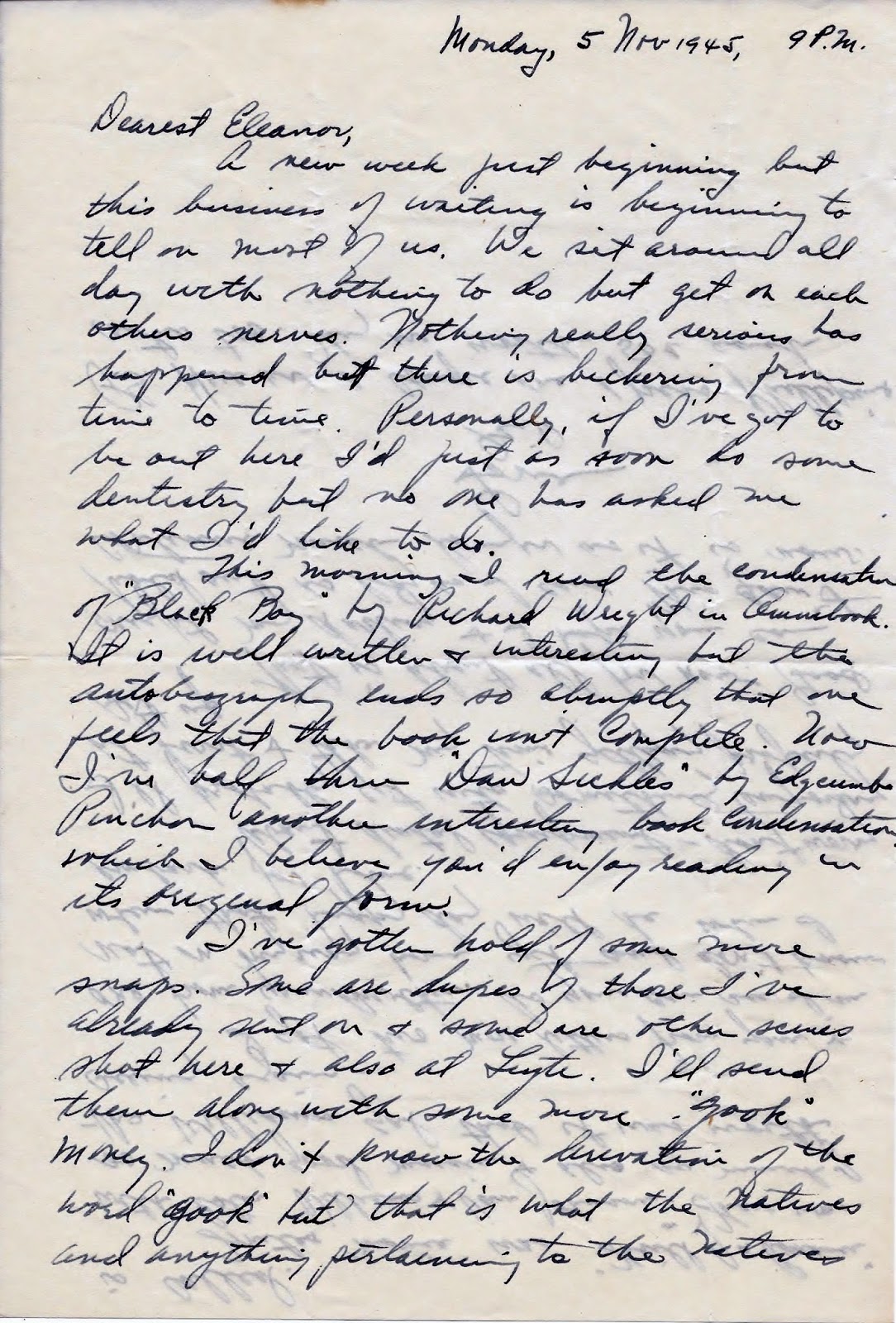 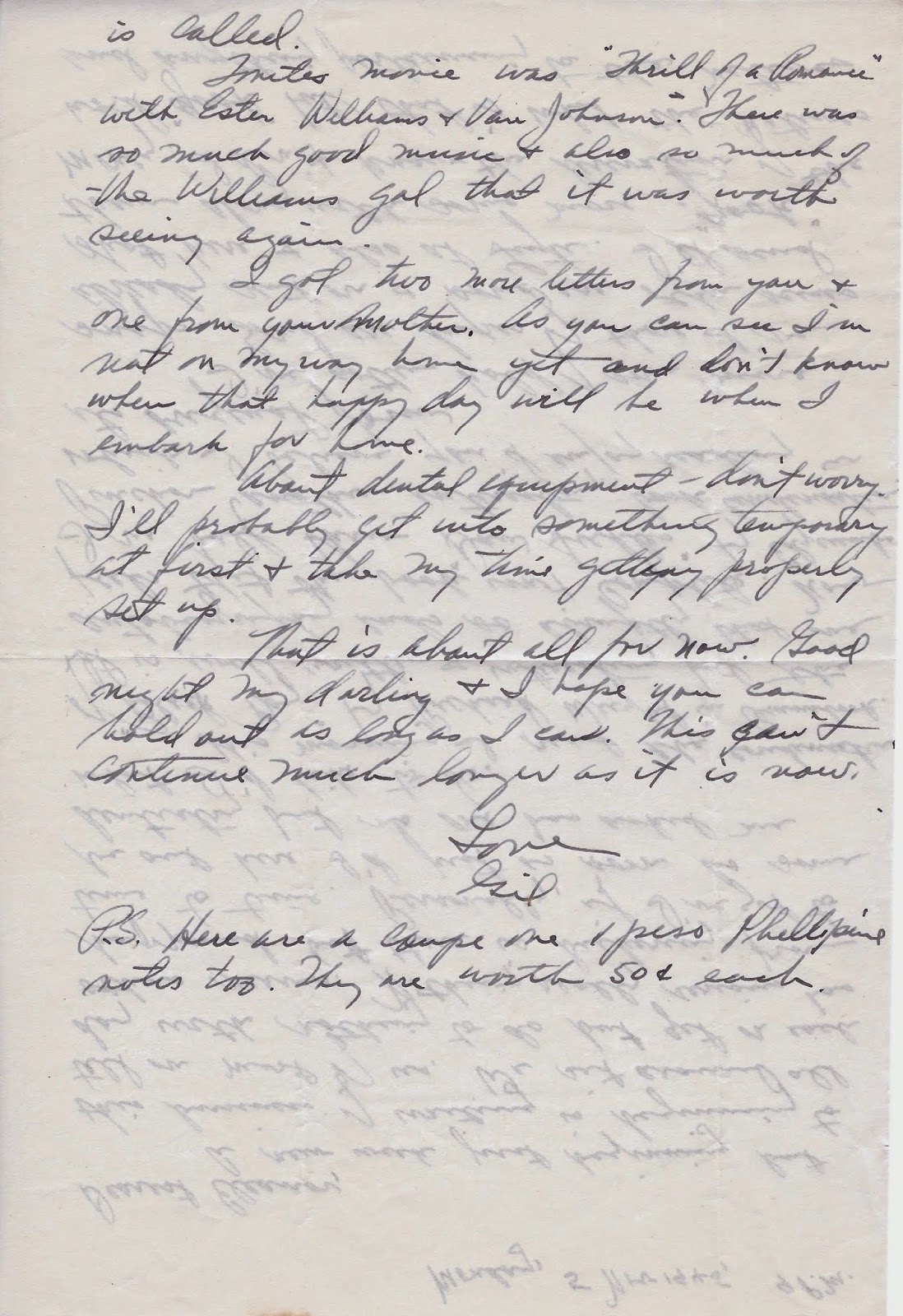 Posted by Linda Steingart Frumkes at 10:47 PM No comments:

Email ThisBlogThis!Share to TwitterShare to FacebookShare to Pinterest
Labels: 1945-11-05 A

Dearest Eleanor,
Another day with nothing accomplished but eating, sleeping and impatiently waiting for something to happen. This morning Leslie and I walked down the road a piece and found a stock pile consigned to the military government. We talked the officer in charge out of a few sets of khakis--trousers and shirts. Now I have enough clothes to get me home. I may even need my blues. Get them ready just in case.
This afternoon we got hold of a jeep and took a ride up the coast. We saw several PBYs (sea planes) blown up during the typhoon onto the beach. We climbed into the wrecks. Leslie took some pictures. I do hope they come out. We got back just in time for dinner.
After chow we went to the movie. The picture was "Divorce" with Kay Francis and Bruce Cabot. It was a picture with a moral but still not very bad. Now here I am.
It is pretty cool tonight. I did appreciate the fur lined jacket issued to me. Bet I use both blankets when I turn in tonight.
No mail again today so that is all for tonight. Goodnight Darling and pleasant dreams.
Love,
Gil
Wrecked PBYs (Gil identified the sea planes incorrectly--they are PBMs) 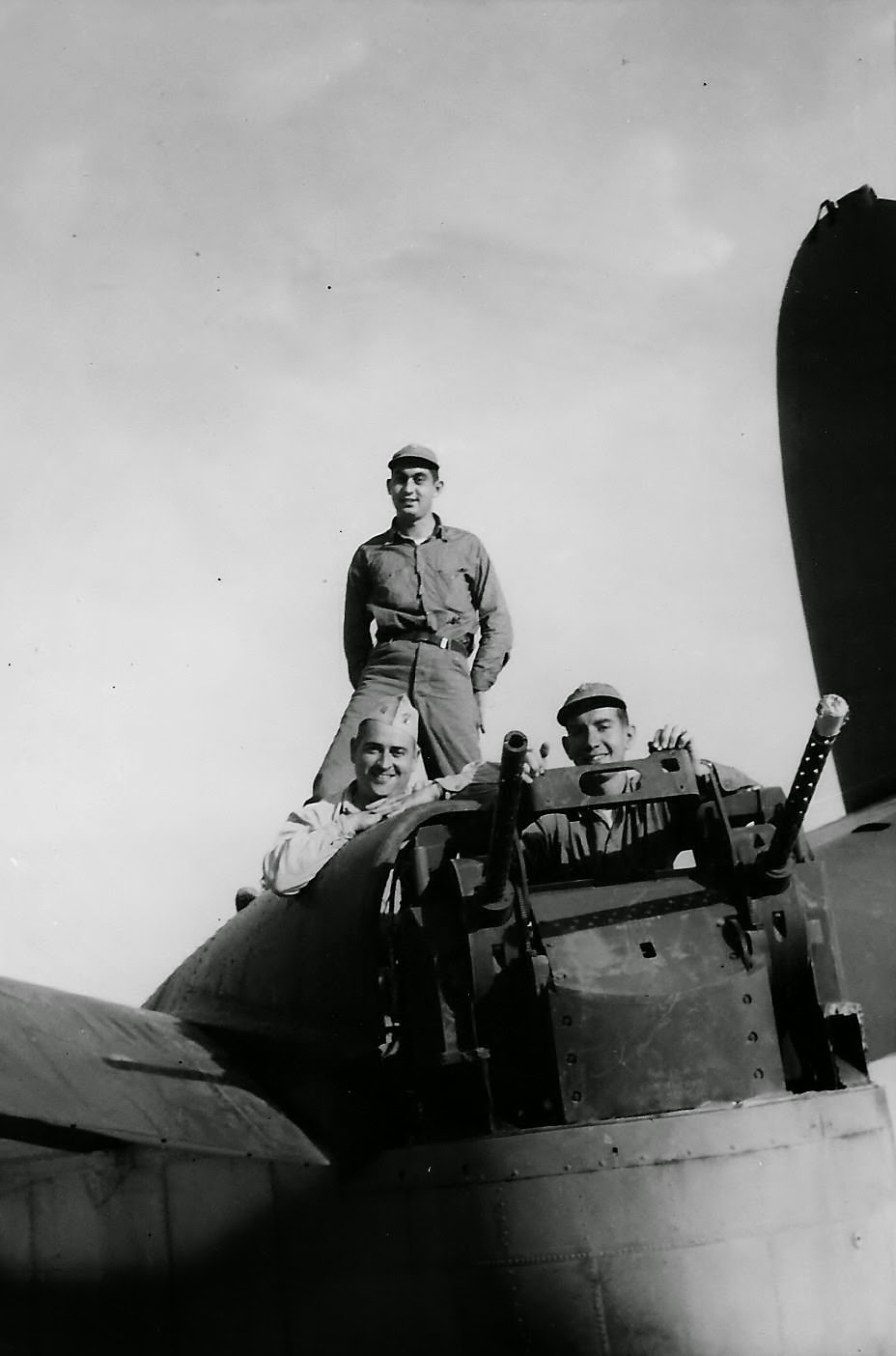 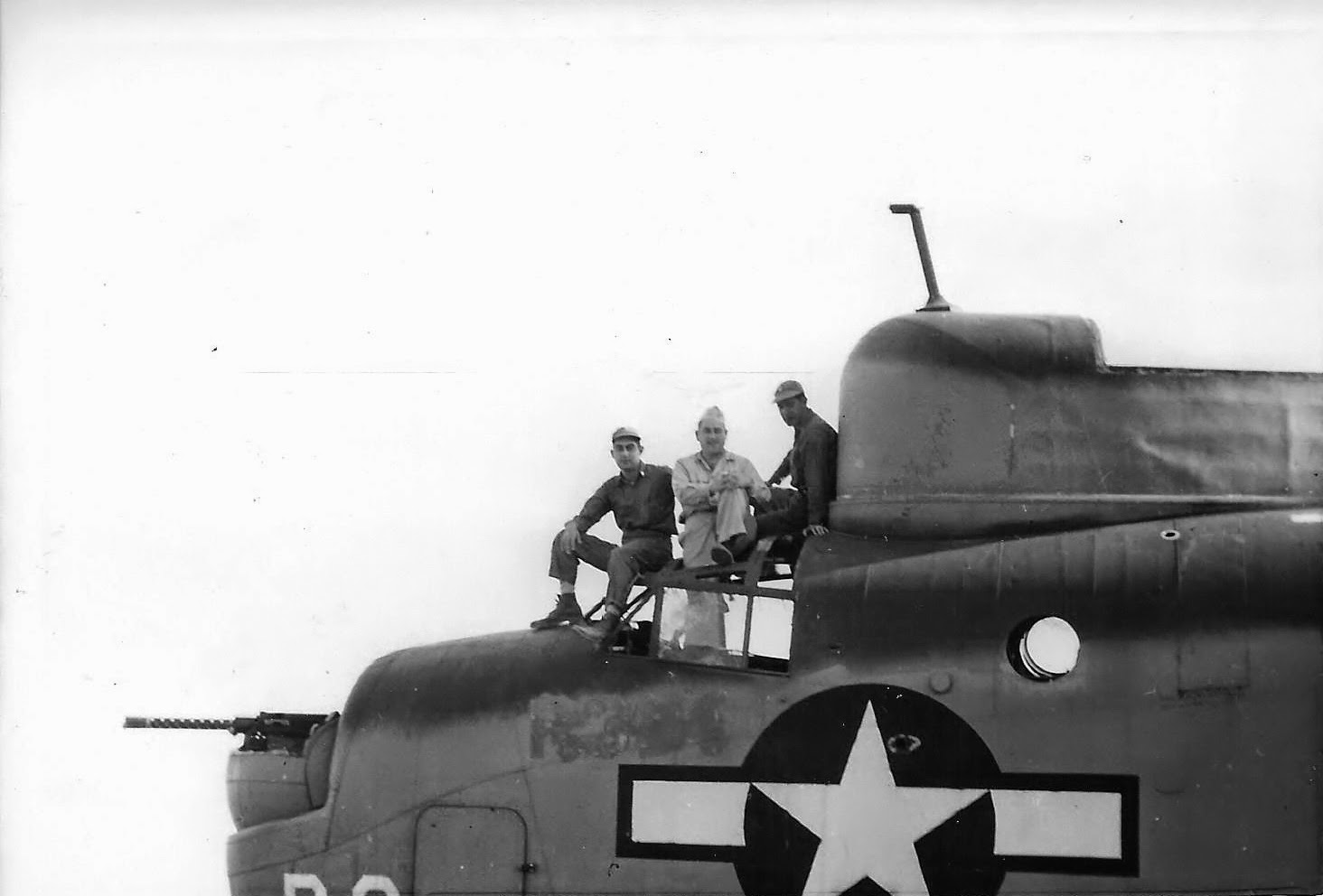 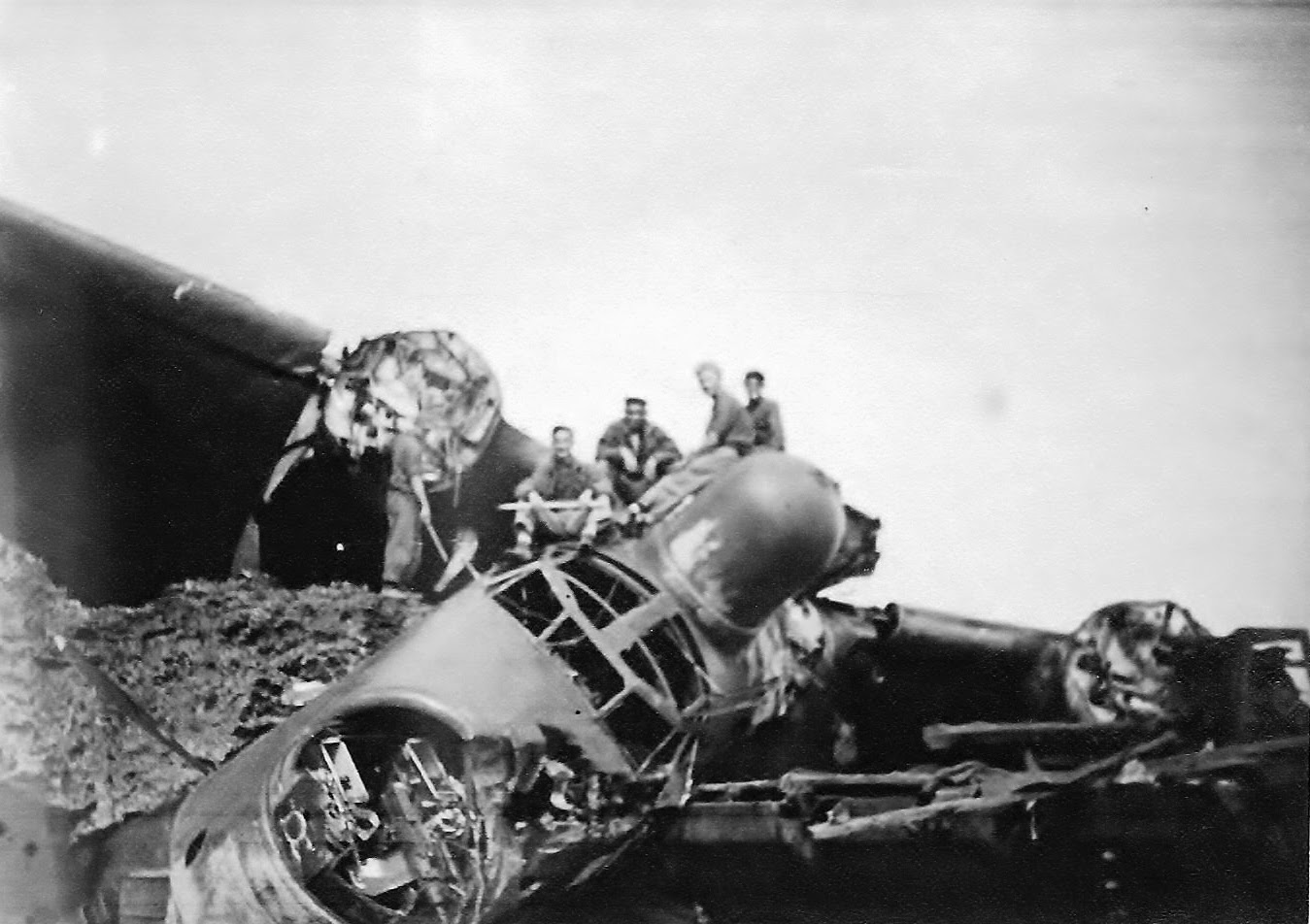 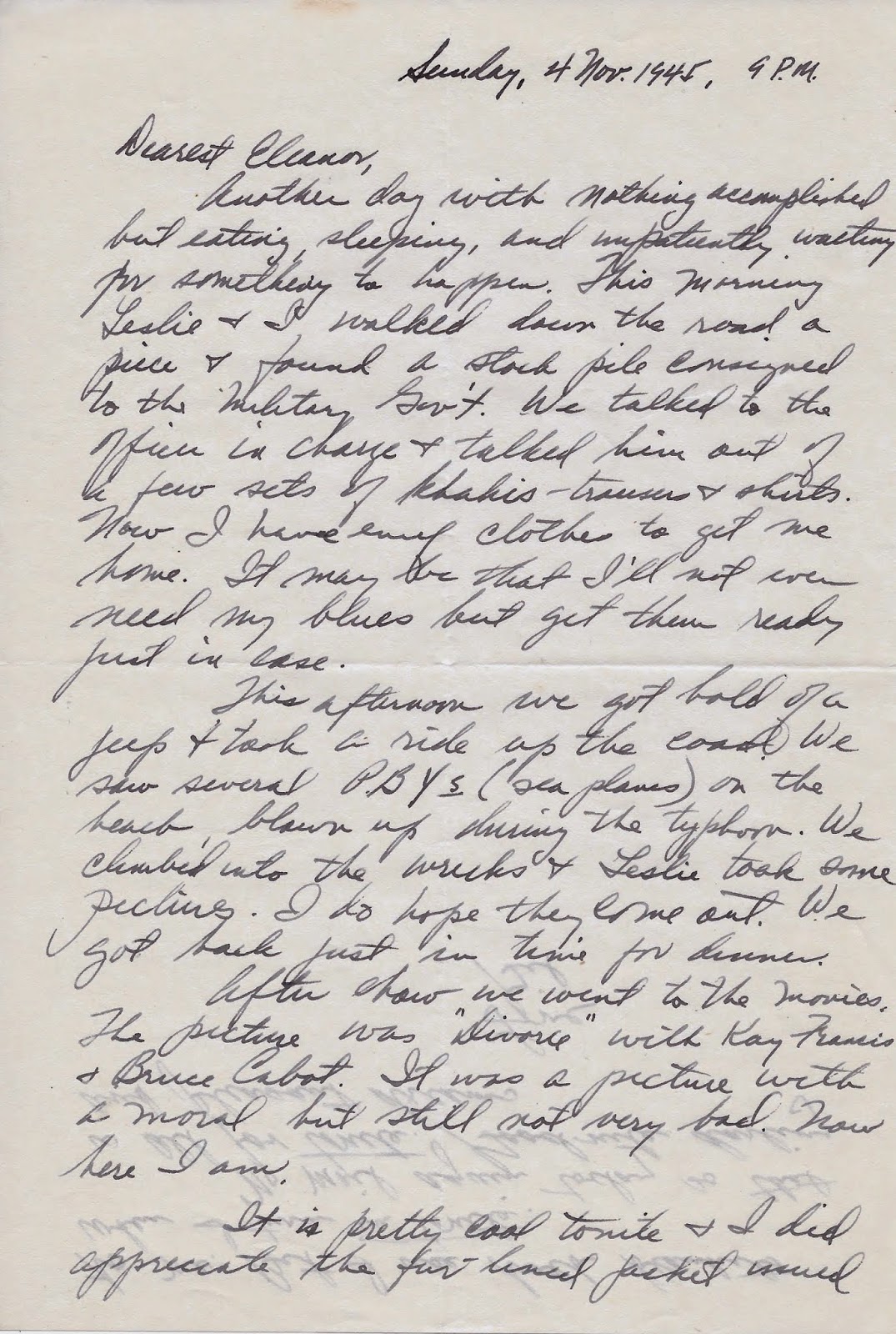 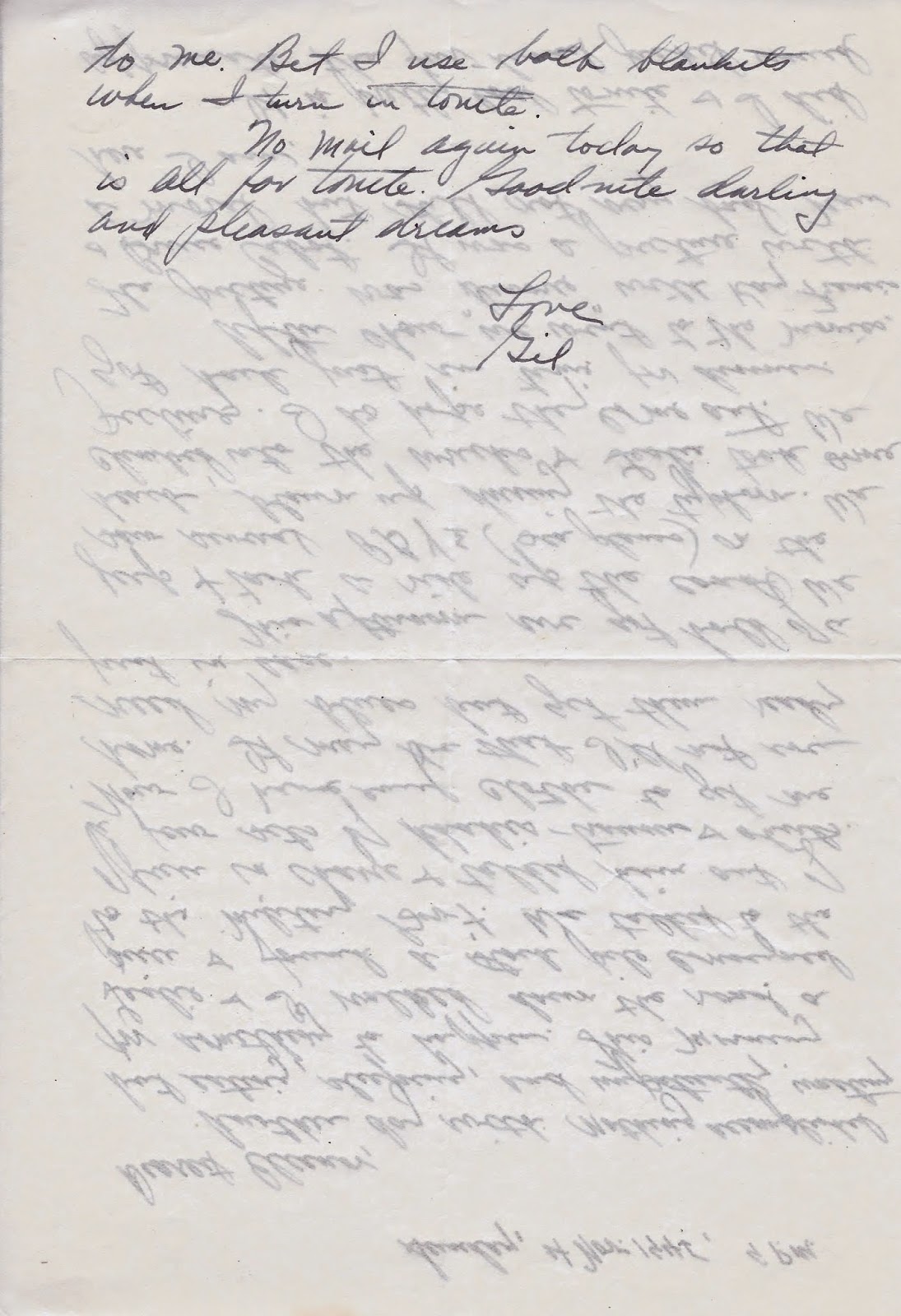 Posted by Linda Steingart Frumkes at 10:33 PM No comments:

Email ThisBlogThis!Share to TwitterShare to FacebookShare to Pinterest
Labels: 1945-11-04 A

Dearest Eleanor,
Another day of waiting gone to hell. I was OD today so I did have a few minor details to care for. After lunch I took one of the boys, who had a bad tooth, over to the CBs and fixed him up.
These days are so much alike that there isn't a darn thing to write about. I'm still expecting something to break in a day or so, but all we can do is wait.
Tonight's movie "A Bell for Adano" was very good. We had it aboard ship but somehow I missed it. I was ashore that night or something.
There was no mail today so that is about all I've got to write about.
Goodnight Darling I know how impatient you must be getting. There isn't very much either you or I can do about it. I'm impatient too and keep day dreaming about "us."
Love,
Gil 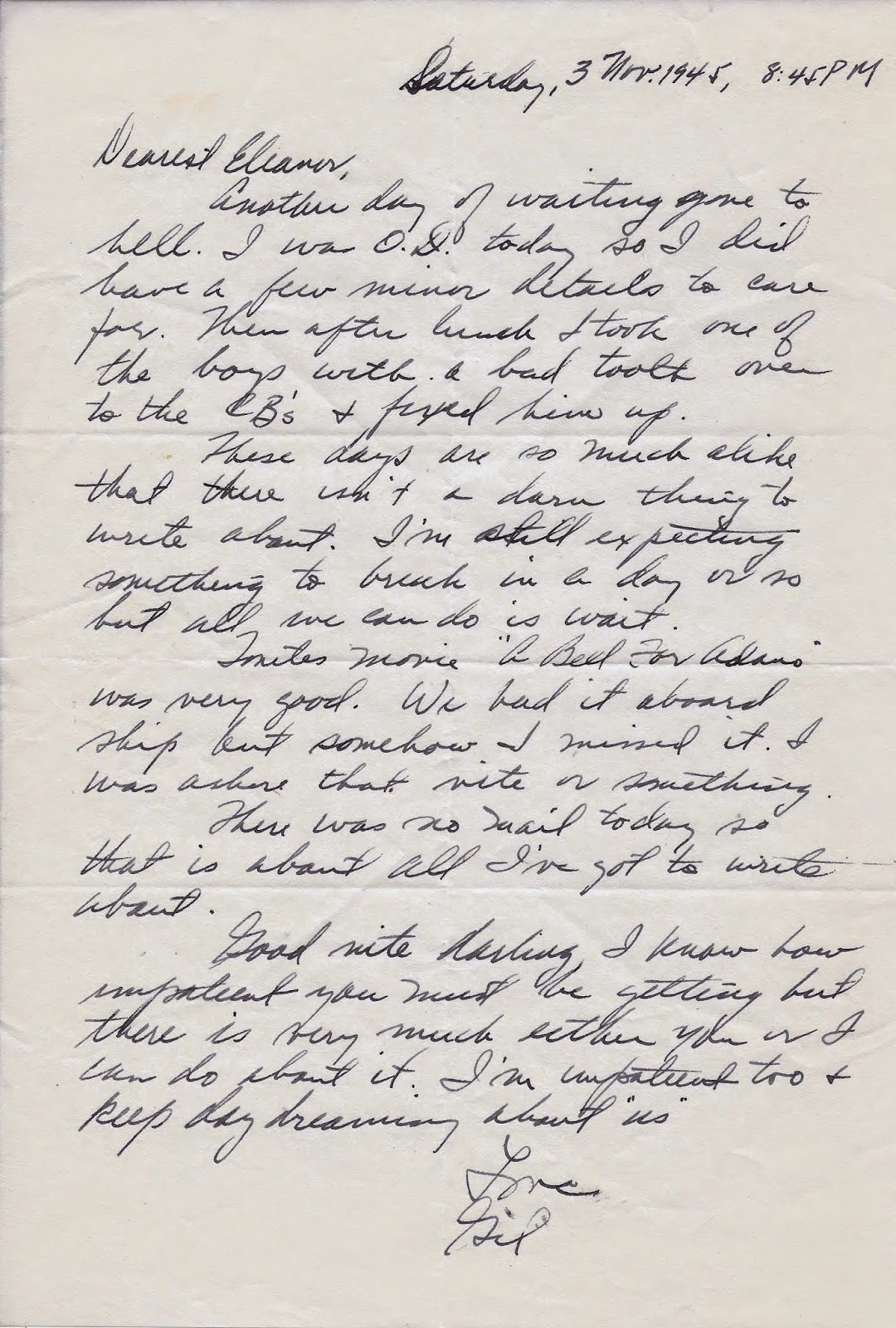 Posted by Linda Steingart Frumkes at 2:55 PM No comments:

Email ThisBlogThis!Share to TwitterShare to FacebookShare to Pinterest
Labels: 1945-11-03 A

Dearest Eleanor,
Another day gone, but still nothing exciting to tell about. Official word has come from Washington to decommission and abandon the Ocelot. Of course no one out here knew that was the word so nothing could be done. Now that we have the green light maybe we'll see some results.
Here is another choice bit that makes my blood boil. The survey board that flew out from Washington took the weekend off to fly to Tokyo. It doesn't affect us because they've already surveyed our ship. However several dozen ships are awaiting their pleasure. They've been waiting for almost a month now, so what difference does a couple of days make.
The mail brought me letters from you and your mother plus two dental magazines. Your letter was short note on the back of the one from your mother. It was dated October 26. Nothing to comment on.
The movie tonight was a double feature. First we had Laurel and Hardy in "The Bullfighter" and then Pamela Blake in "Three is a Crowd." Both were repeats but I went just the same.
A couple of days ago I sent my claim check for $410.80. Just mentioning it again. If you haven't received it yet, be on the lookout for it. I've endorsed it for deposit only so that you won't need to endorse it. Just deposit it in our account.
And that is all the dope for tonight.     Goodnight my love. Though I can't say how soon I'll be home to say "I love you." Till tomorrow then.
Your devoted,
Gil
Other ships 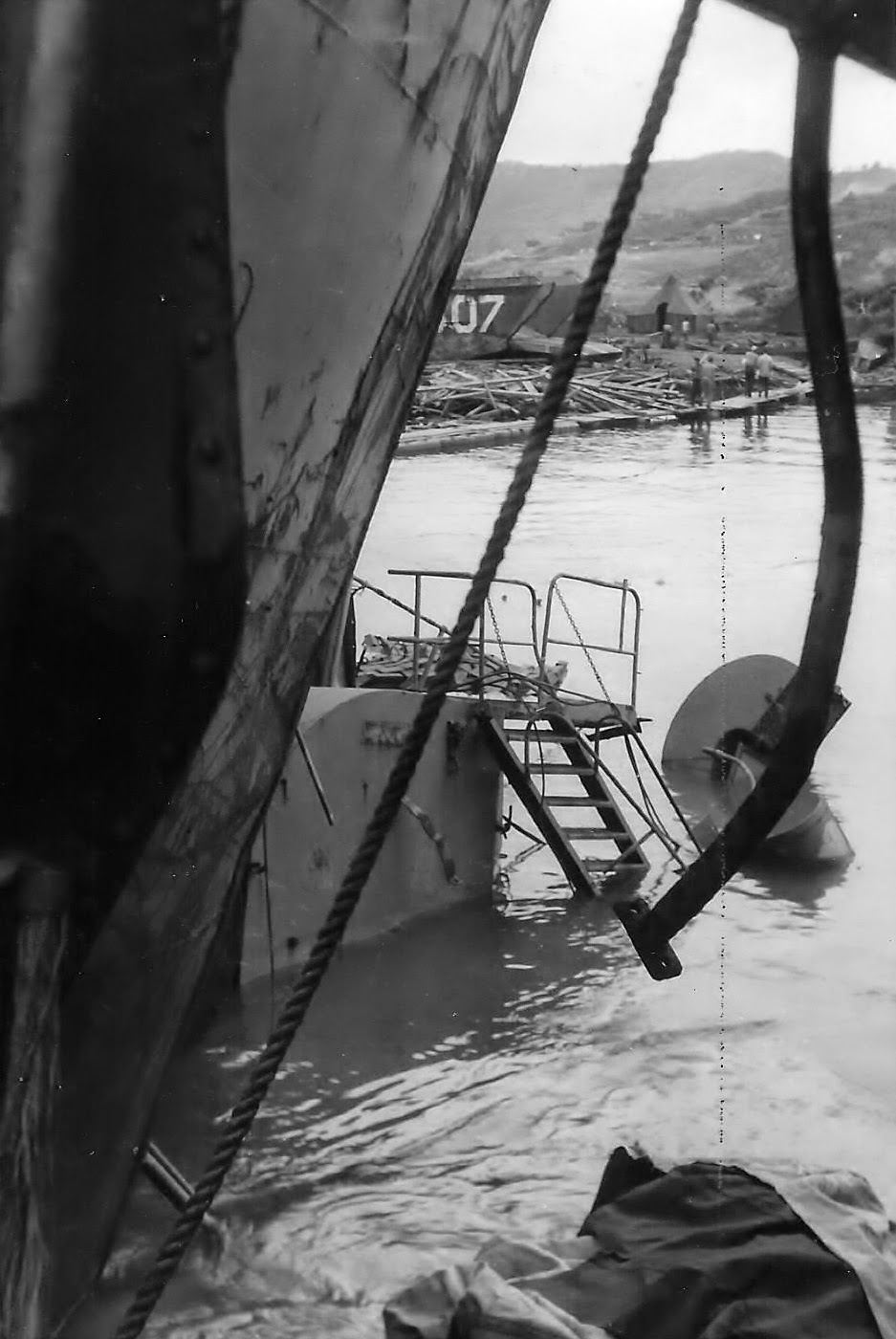 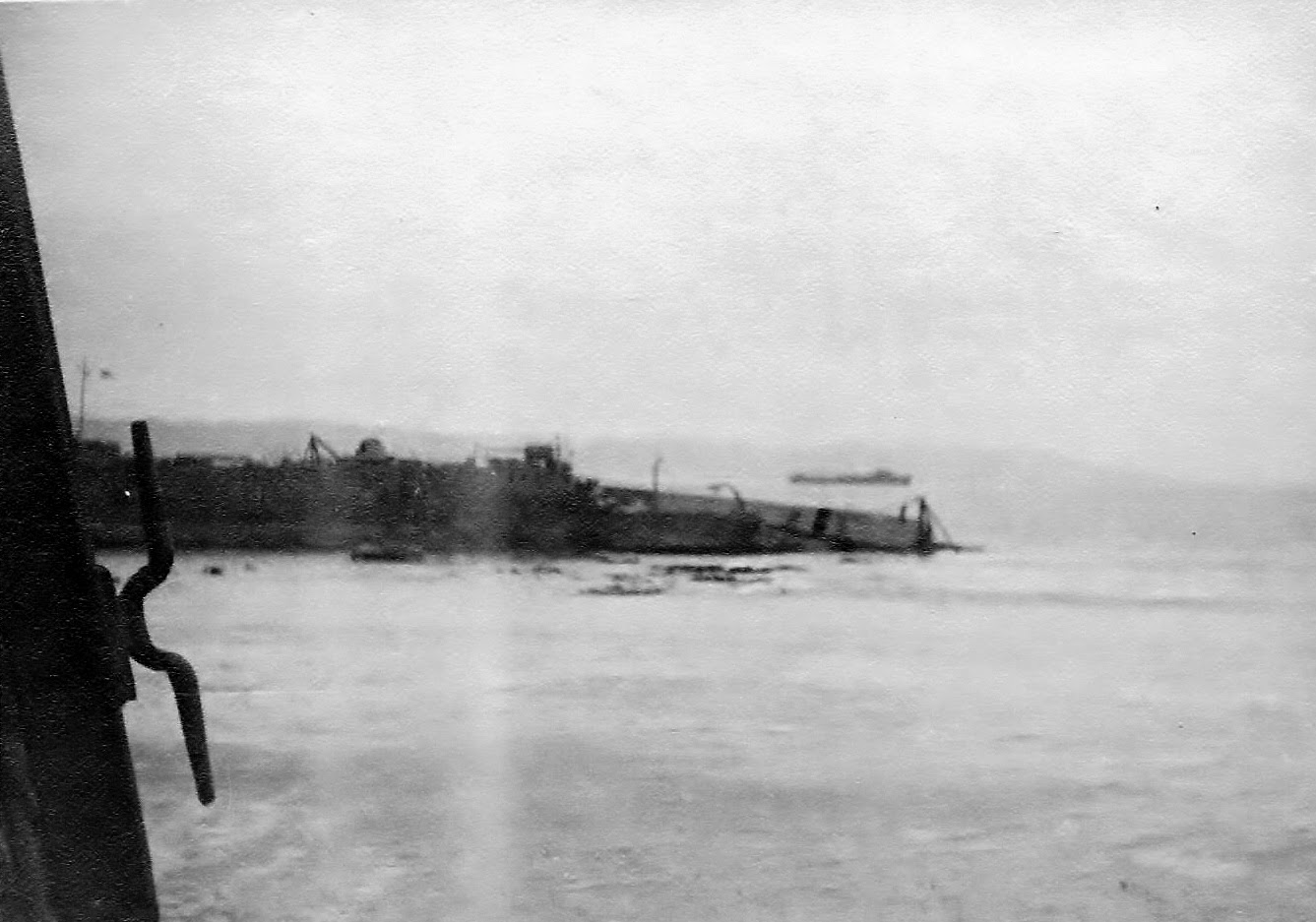 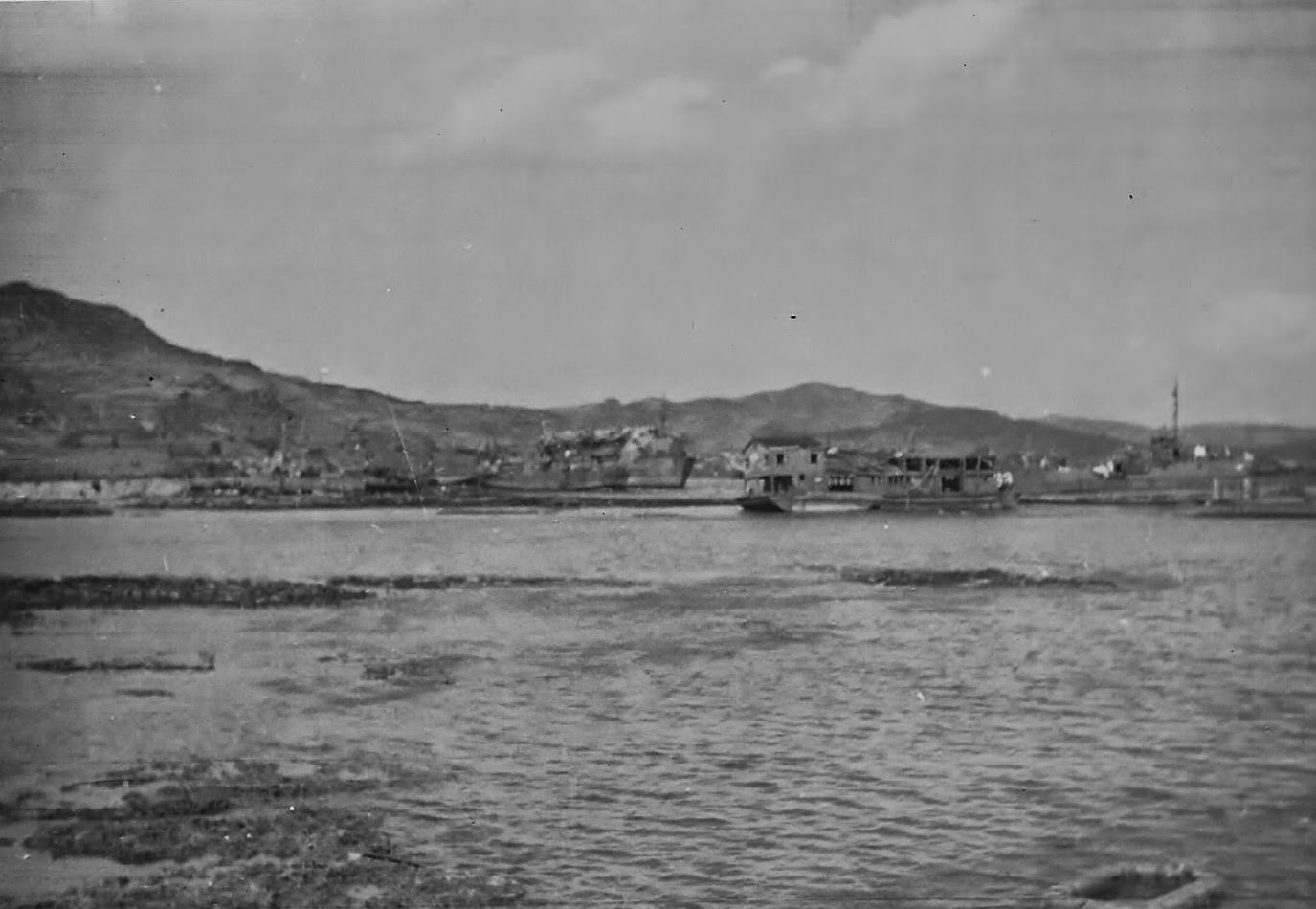 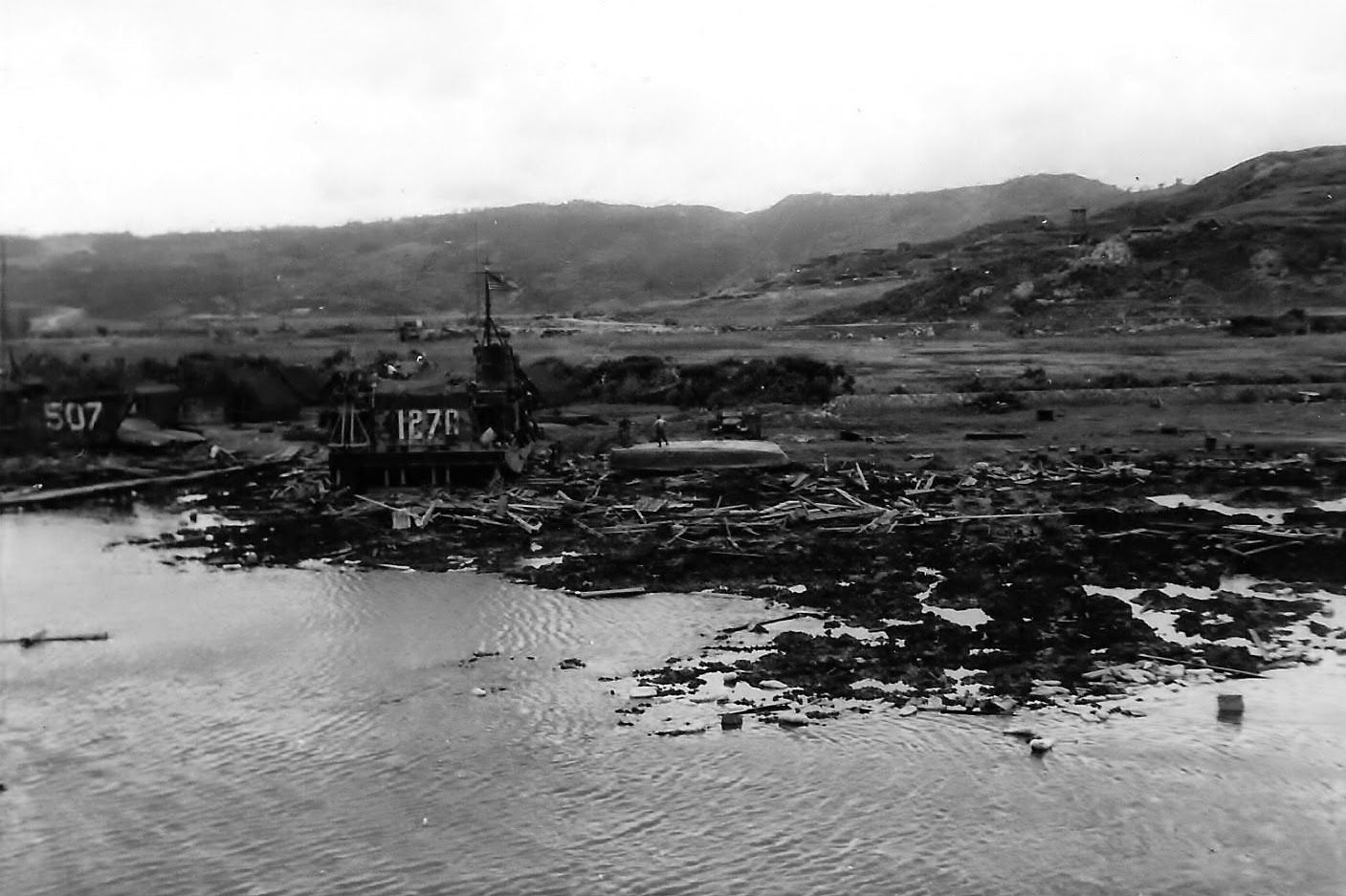 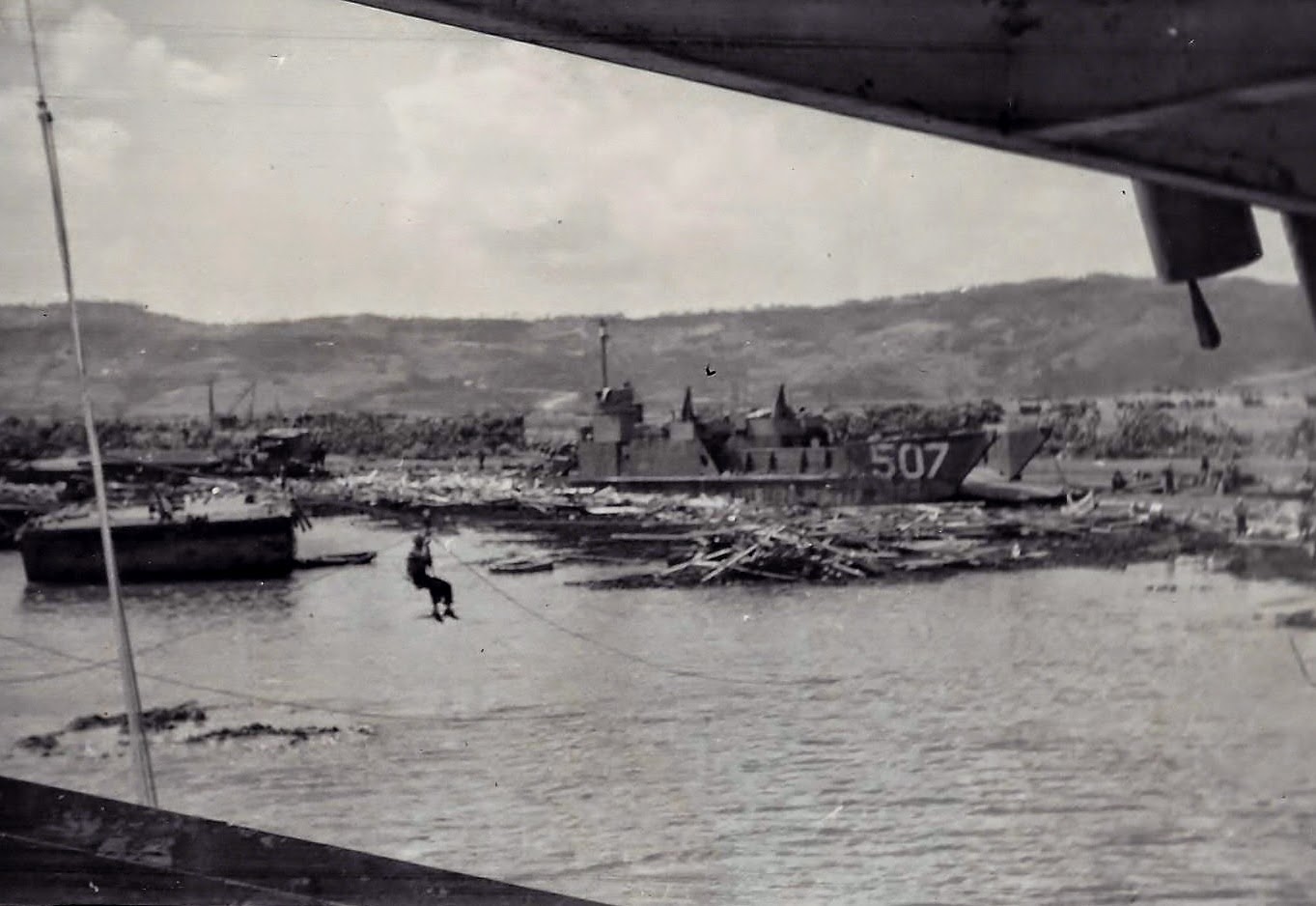 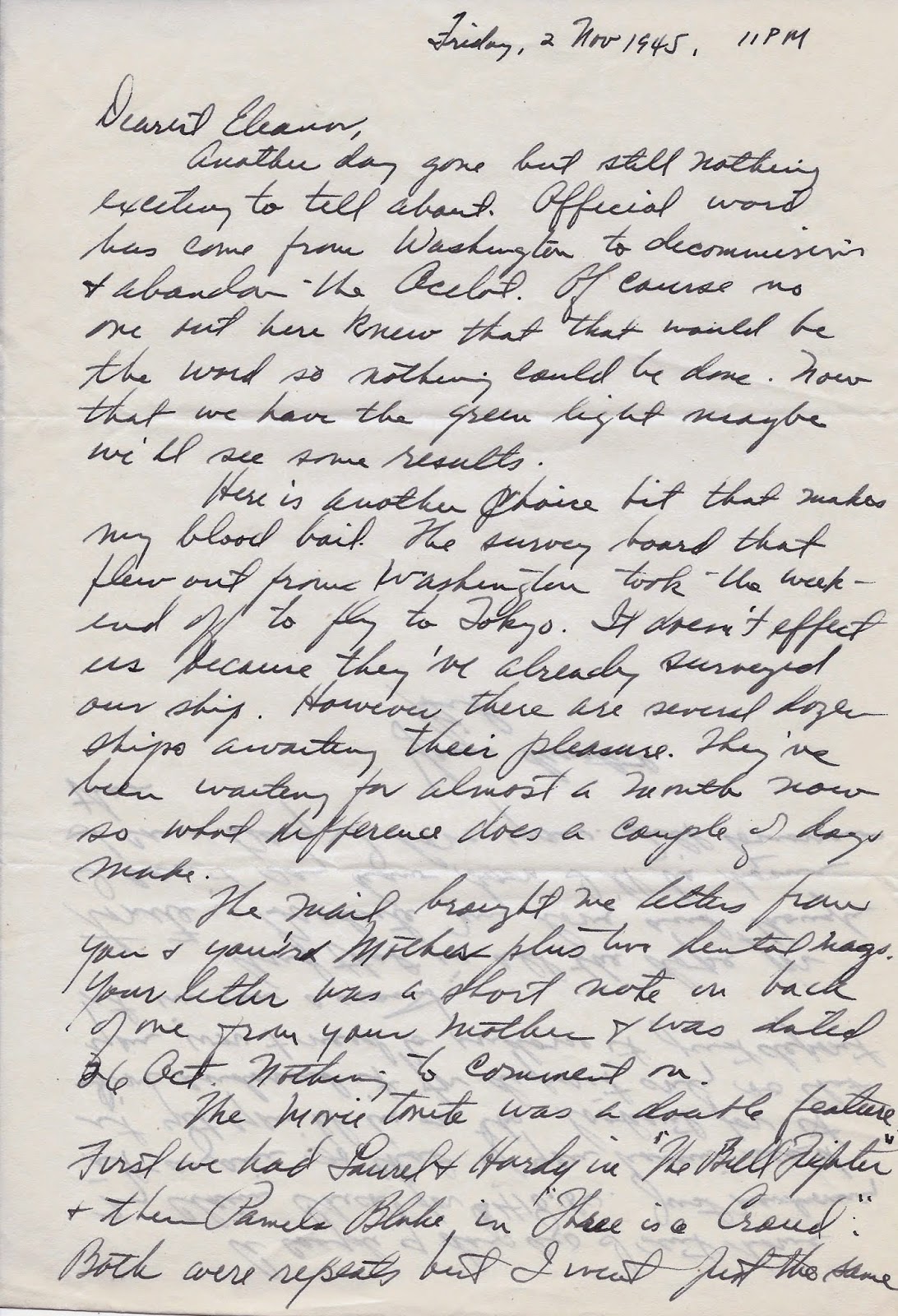 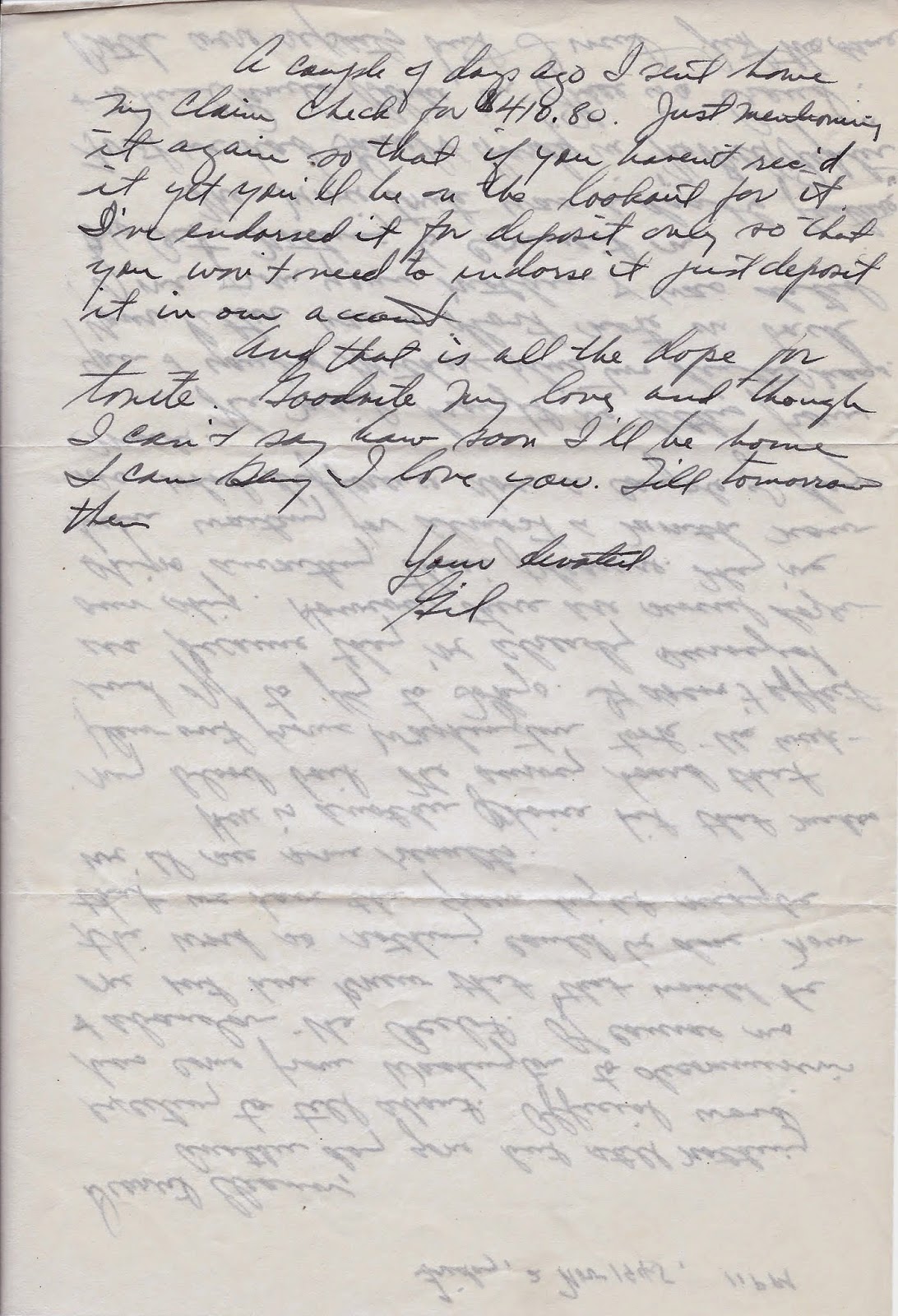 Posted by Linda Steingart Frumkes at 9:40 PM No comments:

Email ThisBlogThis!Share to TwitterShare to FacebookShare to Pinterest
Labels: 1945-11-02 A

Dearest Eleanor,
And so begins a new month with nothing to do and lots of time to do it in. There is supposed to be a shortage of doctors. Why else are 53 points required for them to get out? Well, on Okinawa at one hospital alone there are fifty-five doctors and seven hundred corpsmen. Yet there are no patients. What's being done about it? Just as much as is being done about us. Nothing. Although there was plenty that I didn't like about the Navy, I never complained as long as I had a job to do. However, when you see so many men with nothing to do and nothing is being done about moving or releasing them, you can't help but get just a wee bit disgusted. I'm plenty fed up.
Nothing new about us that sounds encouraging. From day to day the dope changes, but no one will make a definite decision about the disposition of the Ocelot or its crew. The only hope is that the ship will be disposed of soon and then the crew will have to be disposed of. I'm just hoping I can be home by Xmas. Not being there for the holiday is one disappointment I couldn't stand. For the time being there is nothing I can do but wait and hope. Maybe I'll get bureau orders soon and then nothing can hold me. Let's hope. If I believed in prayers I'd even pray.
Tonight's movie was the "Cowboy and the Lady." Another repeat. It seems that the movies here are all old ones, not new ones like we got on the Ocelot.
That is thirty for tonight. Maybe tomorrow I'll have better news. Goodnight Sweet. Don't let this upset you. In any event our separation can't last much longer.
Love,
Gil
U.S.S. Ocelot and Nestor YP289 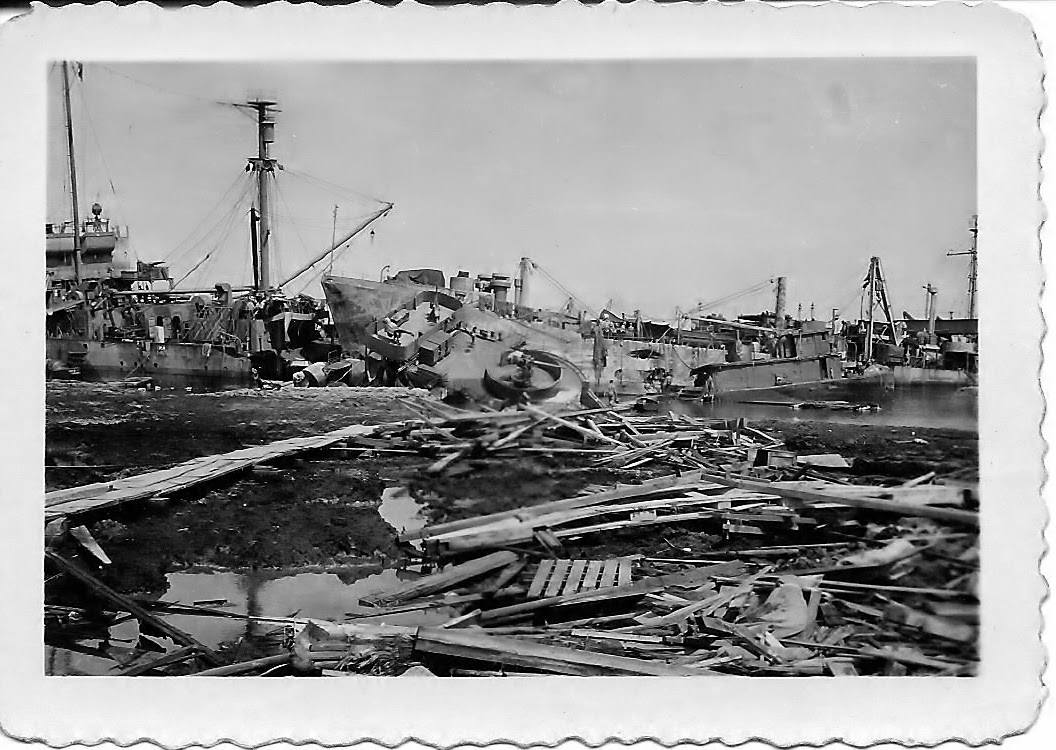 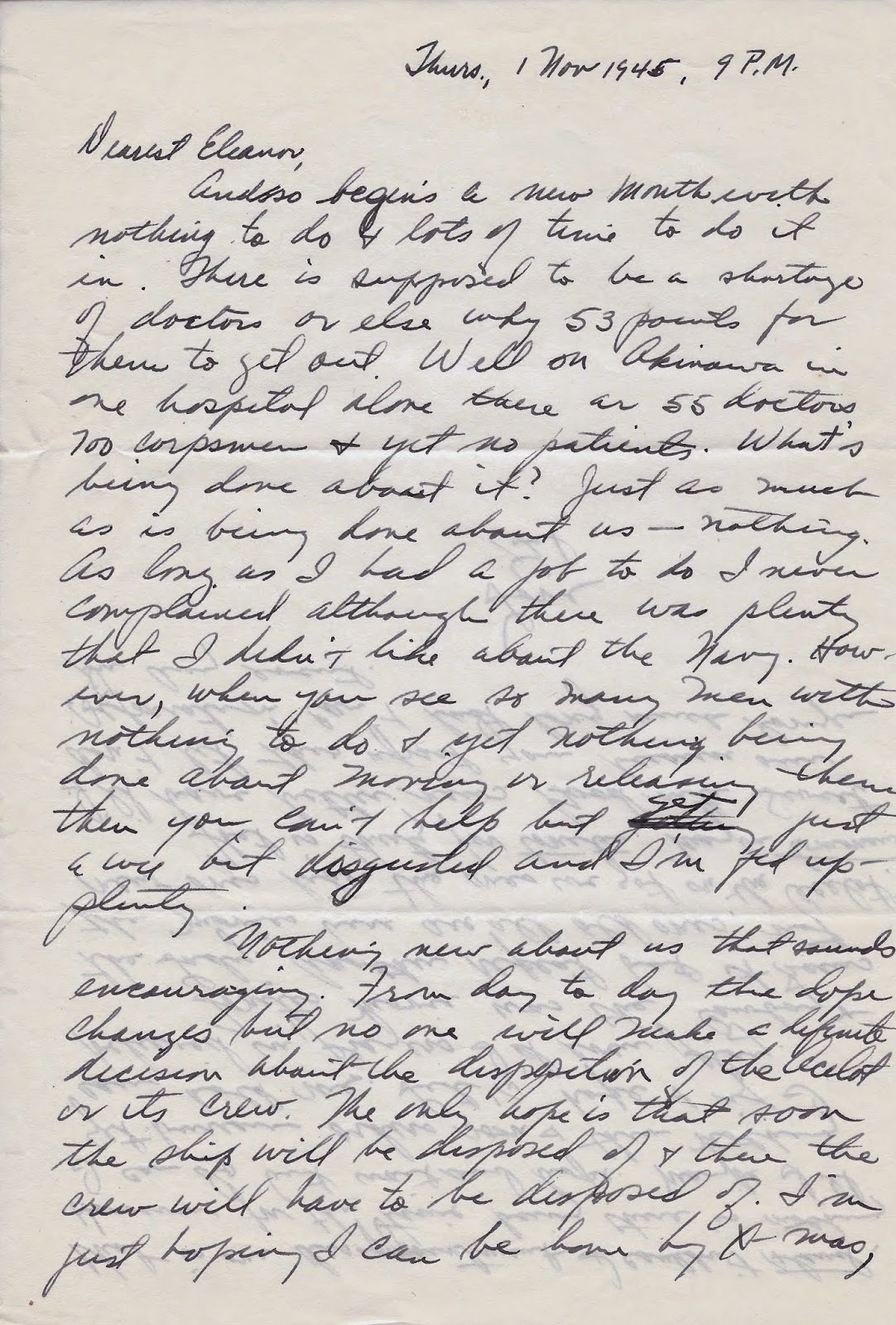 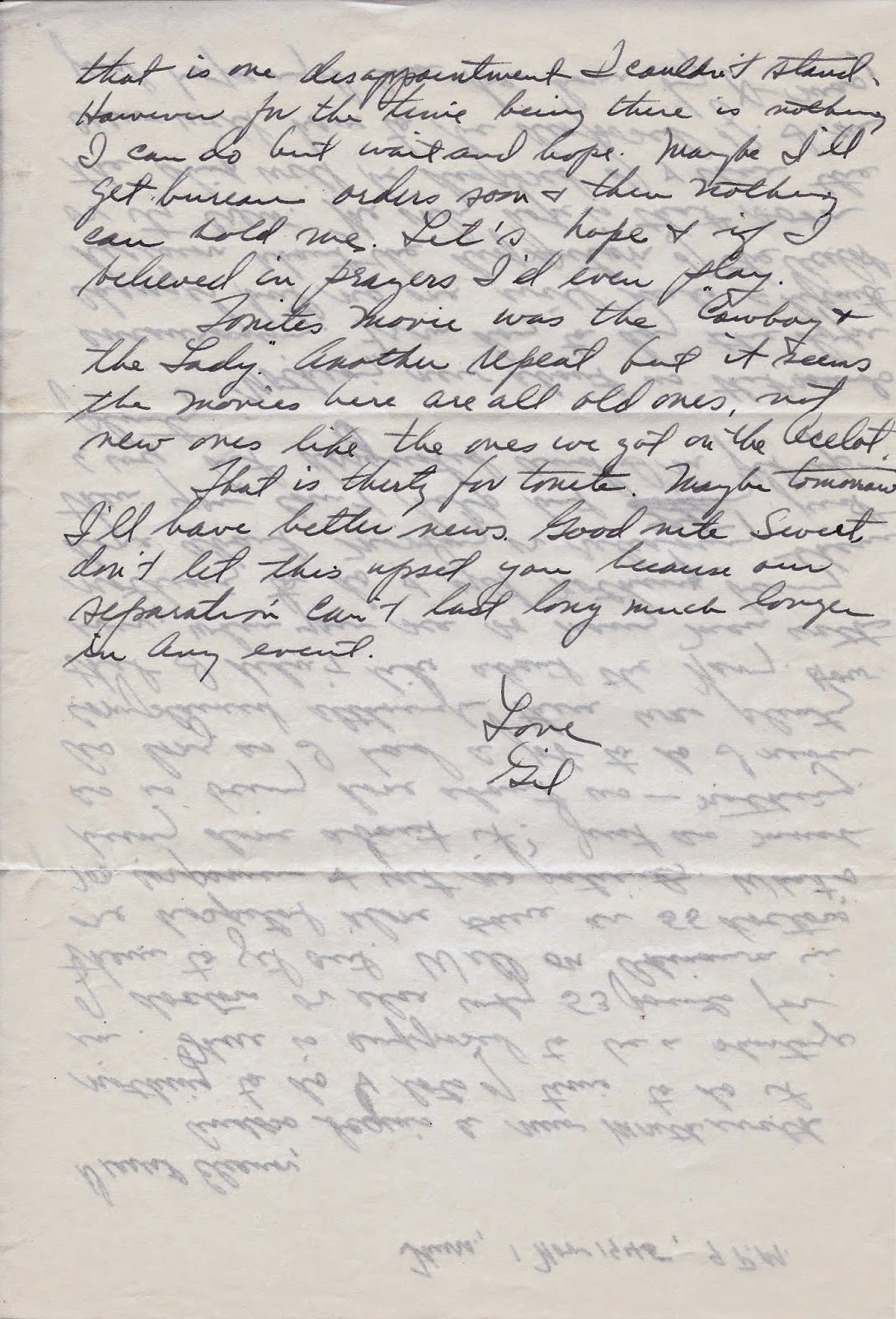 Posted by Linda Steingart Frumkes at 8:54 PM No comments: